David’s work has received extensive press coverage in the media. His projects have been reviewed in newspapers, online, as well as on television and radio.

The Daily Record: Inside prison life with the Kray twins – from secret gay sex to celebrity visitors

The Daily Mirror: Celebrity visitors, food and wine from Harrods and secret gay sex in the showers – inside prison life with the Kray twins

Ronnie and Reggie Kray might have been serving life in prison for murder but that didn’t stop them living the high life with their celebrity friends.

The Daily Express: Dad may have been a gangster, but to us he was a perfect man

Charlie Richardson was one of Britain’s most notorious gangsters, jailed for 25 years for extortion, fraud, assault and grievous bodily harm. Yet when David Meikle, the co-writer of his biography, talks to his daughters they say that he was always ‘a dad in a million’ to them.

Fred Dinenage has worked with David Meikle on two other crime books: Charlie Richardson – The Last Gangster and I Am Not a Gangster.

The Daily Mail: ‘My sons were stolen from me’

When her four young sons were abducted by their father and taken to Saudi Arabia, distraught mother Helle Amin faced a huge diplomatic and legal battle just to see them again. But she didn’t stop fighting until she’d won them back for good. David and Helle worked together on Reunited in the Desert.

These scripts were written by David Meikle, from Twyford. David is a freelance scriptwriter for ITV and a lifelong Titanic enthusiast. 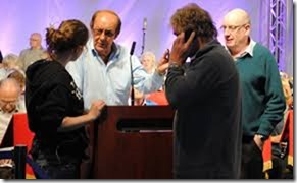 Fred Dinenage with David at the ceremony to mark 100 years since Titanic set sail from  Southampton.

The Scotsman: Aberdeen millionaire and the German baker who saved his life

A man who made his millions in the “gold rush” days of the 1970s North Sea oil boom has spoken of his biggest acquisition – finding the blood donor who has twice saved his life.

David and Eric Evans celebrate the launch of Diamonds for Rice

The Daily Mirror: Dad-of-two who has cheated death eight times admits “I am on my ninth life”